Just another couple maps today. These two I feel came out really well and I used them in the D&D game last weekend. Both made with Dungeon Draft, but found more tools - namely the Shadow Path tool and the Cliff Path tool.

Also, after playing Elder Scrolls Online I realized how boring a lot of cave maps are for color and textures, and so I tried a different way to get a cave effect but with room for water and plant life growing inside. You can decide for yourself if you like it or not. 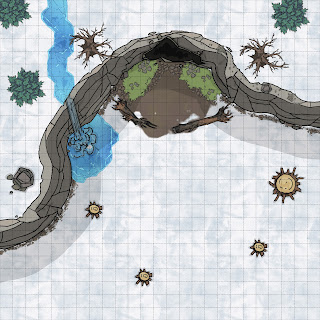 The first map was the entrance to the cave system. Idea is PCs approach from the bottom area and there are lookouts at the cave mouth and on the ridge above. It gave the PCs a chance to plan their takedown of the entrance - did they want to try to be stealthy or loud. They ended up getting a solid alpha strike off on the Gnolls which made for a quick fight. 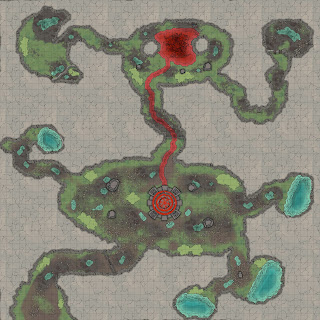 This was the inside of the cave. The overall shape is a little wonky, but overall I'm happy with how the effect of doing a cave with negative space instead of the cave tool came out. Someday hopefully DungeonDraft will let me paint textures on cave floor and building floors, but that is not today so for today we work around it. The pool at the top has a bunch of freshly killed (and not so freshly killed) bodies in it, that is staining the pool red and making a small stream of bloody water down which powers the demonic portal. I really like how well tinting the water red came out, and how it really catches the eye. I am also pleased with how the cliff path tool under water does a good job of showing a steep depth increase right at the edge, which helps sell the depth of the pool along with a darker texture beneath and some shadow work.