We started building a dungeon. And today we're finally adding monsters to the third and final floor of that dungeon (though technically this is the 'middle' level!) In the interest of brevity, I'll keep this focused on the map itself. This is the 'basement' map for the dungeon we made, the transition point between the surface and subterranean entrances. As per the story of the dungeon the stronghold fell to invaders, but that was in the past. Now it is home for monsters.

Expected LevelIn the interest of usability I figured making the dungeon with Level 2 PCs in mind would be a good idea. They can stumble across this early in their adventure - or be hired to check it out. It keeps the monsters manageable, but the PCs should already have their first adventure behind them.

For encounters I expected 4 PCs, but I've included the ratio of Monster:PCs for a Level 2 PC in the monster list. If you have more PCs, feel free to add another group of monsters here and there. Just remember, not every encounter needs to be deadly.

Disconnected Rooms
When making the map for this dungeon I made seven disconnected rooms from the central map. These rooms were originally intended to be optional additions to expand on the dungeon and have some hidden areas. The idea for that continues here. If you wish to use one of the expanded rooms (numbered 1-7 on the map) they should link up with the main map in the equivalent lettered room. For example, room 1 is accessed through a secret door in room A. Room 2 is accessed through room B and so on.

The Monsters
In the surface level we used bandits, hobgoblins, and goblins with a couple beasts (dogs and aurochs.) In the underground level we used kobolds and several monstrosities. In the middle I'm sticking with undead primarily. The idea here being the trapped spirits of either the original holders of the stronghold, or the people who took it from them, or just someone else. Also, Room 3 has a special boss encounter that may just wipe a level 2 party but shouldn't. Despite the fact a CR 3 monster is rough for 4 level 2 PCs, Action economy is on their side.

Without further ado! The monsters:

Pure Function
As a note, I did not do any description or story for this. You can add your own descriptions and story as fits your game. Story can be important, but this is a re-usable dungeon and having the story before the build here (aside from the dungeon origin) just feels like a way to lock in things that we want to be mutable.
The Map - Now With Markings 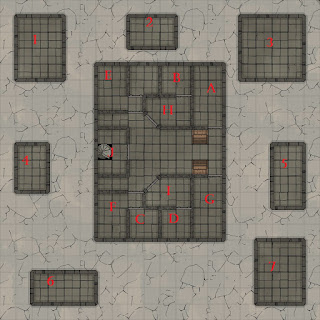