We started building a dungeon. And today we're finally adding monsters to that dungeon. In the interest of brevity, I'll keep this focused on the map itself. This is the surface map for the dungeon we made, one of two entrances and transition points between the surface and below ground caves. As per the story of the dungeon the stronghold fell to invaders, but that was in the past. Now it is home for monsters.

Expected Level
In the interest of usability I figured making the dungeon with Level 2 PCs in mind would be a good idea. They can stumble across this early in their adventure - or be hired to check it out. It keeps the monsters manageable, but the PCs should already have their first adventure behind them.

For encounters I expected 4 PCs, but I've included the ratio of Monster:PCs for a Level 2 PC in the monster list. If you have more PCs, feel free to add another group of monsters here and there. Just remember, not every encounter needs to be deadly.

The Monsters
For monsters I made a simple list. I want there to be the opportunity for Social play instead of just a kill everything dungeon, so I mostly used humanoids. I like the idea of an eclectic group of bandits, goblins, and hobgoblins that have pulled together for mutual survival and so I ran with that.

For the ratios for other levels of PCs check the tables in Xanathar's Guide to Everything. I know I said I expected 4 level 2 PCs, and Bandit Captain says it is good for 6 Level 2 PCs, but a CR2 is also the recommended 'Solo Boss' encounter for 4 level 2 PCs. The Captain is our Boss for this level.
Pure Function
As a note, I did not do any description or story for this. You can add your own descriptions and story as fits your game. Story can be important, but this is a re-usable dungeon and having the story before the build here (aside from the dungeon origin) just feels like a way to lock in things that we want to be mutable.
The Map - Now With Markings 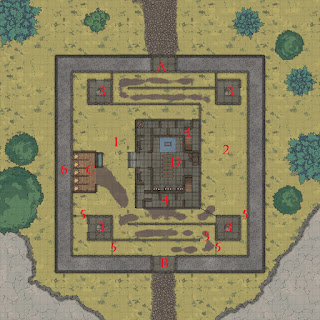 The Key
A. The north entrance to the stronghold is guarded by two (2) Hobgoblins in charge of four (4) bandits. They have clear lines of sight approaching the stronghold, and are tasked with challenging anyone who approaches. The bandits are a bit lazy about it, but the hobgoblins are well disciplined. They won’t let anyone into the stronghold, but can be convinced (Persuasion/Deception DC 14) to let people pass who belong there, or are looking to join up. They react with violence if intimidated, unless the person is really intimidating (Intimidation DC. 16)

B.  The south entrance guards people coming from the mountains. As less traffic comes this way it is guarded by a Goblin Boss, three (3) goblins, and two (2) mastiffs. They’re half asleep on the job, but the dogs are still awake and will bark if anyone approaches. The mastiffs are hungry – as are the goblins. They’re not super interested in being on boring guard duty, and are easy to convince you belong (DC 12 Persuasion/Deception) or just aren’t worth the risk of fighting (DC 13 Intimidation.)

C. There are two horses in the stables, along with four (4) goblins who are supposed to be cleaning but are mostly just complaining about having to clean the stables. They know they will get in trouble if anyone touches the boss’s horses, and so will attack. Two more goblins are hiding in the hay, sleeping and avoiding work but will wake up if there is violence or a fight. (Perception 15 to hear one of the goblins snoring from the hay. They are heavily obscured by the hay.)

D. The boss (the bandit captain) is in this room. Once a temple the boss uses the room as more of an audience hall, fancying himself a lord. On the first round of combat he gets a one use Legendary Action to summon 2 bandits into the room to fight with him.

1. This yard was once a training yard, now it has been turned over to pigs and sheep that roam around on the loose eating grass where they can get it. At any time there can be any combination of two of the following in the yard: 1d6 Bandits, 1d4 Mastiffs, 1d6 Goblins, 1d4 Hobgoblins, 1 Goblin Boss

2. Much the same as yard 1, except there are 5 auroachs in this yard. They are not hostile, but will spook and attack anyone who gets within 15’ of them if combat breaks out. At any time there can be any combination of two of the following in the yard: 1d6 Bandits, 1d4 Mastiffs, 1d6 Goblins, 1d4 Hobgoblins, 1 Goblin Boss

3. The guard towers once needed to keep the stronghold safe are mostly abandoned, the ballistae at the top no longer serviceable. The towers are now mostly used as a way to hide from work by lazy bandits/goblins. At any time there is a 50% chance to find 1d6 bandits and/or 1d6 goblins scattered throughout any tower – most likely on the top 2 floors where most don’t bother to climb to look for them.

4. These twisty corridors lead to the stairs down to the Basement level. Any bandit or goblin convinced that everyone on the surface is being killed will flee this way unless they have a clearer shot at the gates.

5. These gates are kept open for ease of moving around. If attackers are known about coming through B, the gates can be closed from the towers

6. There are scattered ladders leading to the tops of the wall from inside. At any time there are 1d4 patrols of 2 hobgoblins on the wall spaced to cover as much of the wall as possible. The patrols at the top are routine, and the Hobgoblins tend not to check behind them too much since no one ever goes up there.