We've been building a dungeon together to go through some basics on dungeon design. After doing some rolls and making some decisions we settled on a temple converted to a stronghold by a Chaotic Good Elven Monk that was then taken over by invaders. We have three goals with these maps we're making:

That said, here's the map for the underground entrance to the temple turned stronghold. Once again made with Dungeon Draft. 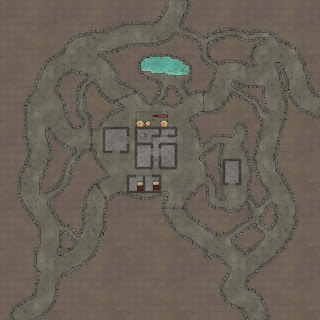 The idea for the underground entrance was for it to connect to multiple cave systems. Making the temple a sort of bridge between the 'Underdark' and the 'Surface' worlds - with the basement being sort of the transition point.

Unlike the surface we can't block off the whole cave with walls, but we can build gates at entrance tunnels to help control people come into the stronghold. We have a source of water to the north of the main chamber. And we have plenty of room for living quarters or other space as needed - including a place to keep underground mounts.

Once again I left as much of the map open as possible for re-use or change of use. We'll go into that soon when we talk about using the map in the next parts of this series!