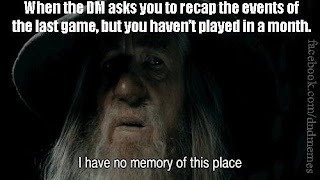 Ever have the meme above happen as a DM? It sucks. It completely sucks. I ended up having to axe a 7th Sea campaign one time because we missed a session, and during the break I completely lost the campaign in my brain and for some reason either didn't take notes, or didn't put them in the right place from the last couple of sessions.

Since then I tend to take my notes with a rocketbook notebook, and scan them to my google drive so I have a digital copy accessible anywhere of the previous session. Even with that though I've had times where I lost exactly where the PCs were. It leads to a muddled beginning of trying to recap with the players what they did, vs what they talked about doing, towards the end of the previous session and then figuring out what is going on from there.

Which is why I have started - or at least I am trying to start - a new practice.

The sessions I've done this has made the transition a lot smoother. I know exactly where the PCs are. I know exactly what they are up to. I know what we talked about them doing. And once we get going on that, my brain fires up, and I can ease into the next session properly.

Sometimes what they are going to do changes. They have had a week or two to consider and maybe have a new idea. It happens. But often it doesn't.

With only a few attempts at this done, it has already been life saving more than once. And maybe it will help you too.