One of the things I'm having a lot of fun with in my D&D game is generating the world around the players. The thing is, this wasn't a game that I had been prepping for years and years and then decided to drop the PCs into. No, this worl didn't exist until I was going to run a game in it. There were just too many other options to waste the time in prep if it wasn't going to be used - even though I do love me some world building. What's resulted from that is something akin to how games like Minecraft do terrain. Namely, it's procedurally generated as the PCs get near to it.

The Broad Strokes Are Important
Obviously you can't start from scratch. When the game started I made a world map with four continents on it - well, four major land masses since there were islands too. I then chose one, where the game would start, and I made a map for that area. You can see the map here. 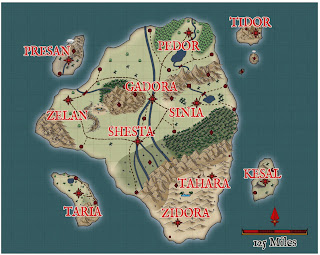 I've shown the players the map - they're all travellers so have likely seen a map here or there before - and told them where we were starting. For those curious, we started at the town (the red dot) just south of the mountains on the right side of the map near the middle.

Now I have a general idea of the rest of the map. There's mountains to the north. A giant forest/jungle rests to the south along with more mountains and a desert region. Most of the area is grasslands, but there are also rivers and cities and towns. The thing is though, only the "major" locations are shown. Capital cities for the kingdoms and major trade downs. Everything else? Not shown.

Emerging From The Fog
What then happens is coming up on every session I need to look at where my PCs are. Where they've moved, and where they've talked about going. Those areas then get developed in more detail. For example, the PCs took a job escorting a caravan to a major city. Along the way they were going to cross a bridge big enough that it is actually on the map.

Any bridge that is a big enough deal to show on the map has to have a story, and thus the Arrowsworth Bridge was born. Arrowsworth is so named because that bridge is built on the sight where a single arrow prevented a major battle between two princes during a civil war several hundred years back. The story of the bridge also inspired the body of water south of the bridge to be named Sovereign's Rest, and it is a burial place for the royal line - or at least the lake is near such a place.

Going into this session my PCs are moving up into the mountains towards a village known as Stonebrook, but what's around that village? I'm not 100% sure. I'm still developing and finalizing it in my head. Beyond that, aside from on the map I'm not sure either.

Pros and Cons
On the pros this means I have the world developed around my players for every session, and I can customize that building to work with whatever it is I am bringing into the game. If I need to have a group of Stone Giants for my PCs to fight, with a home, I can place the ruins of a keep. If I need an Orc army, I can place a camp. If I need a raided town, well, I can place one of those as well.

On the downside though, I can't always point at what's going on in any section of the map. It also means each session takes more development time because I can't just work on story, bad guys, and other obstacles.

There is also something about being confined by a pre-defined map that helps spark creativity to twist things. Granted I do have some guidelines. I can't suddenly say it's a desert or they're in the middle of an ocean, but I do still have miles and miles and miles of room to place things and move them about.

Still, it's a worthwhile endeavor, and so far makes for an interesting world.