Some of the best fun you can have as a GM when running your game is making custom monsters. Now, yes, most systems do have hundreds of pages of beastiaries and monster manuals for you to use, and those monsters can definitely be fun to use, but it just pales in comparison to the custom demon. Even better, in some games - such as L5R and the 40k universe - making your own demons and monsters is a great way of putting a personal twist on the world, the conflict, and the challenge that your players are going to face.
Starting With....Inspiration
The trickiest part I've always found when making my own demons and monsters is where to start. Then the obvious hit me. You start the same exact place that humanity has always started when making its demons and monsters: with the natural world.

The Earth is full of some truly messed up creatures, and while the truth may not always be as scary as what people imagined after catching a glimpse, that is still a great place to start. Most people are creeped out, squicked out, or flat out terrified by bugs. Small wonder that so many canon monsters, demons, and aliens resemble insects - even before you factor in that bugs really do look like alien species.

Some even greater examples, especially for size, can come from the natural world. For example: 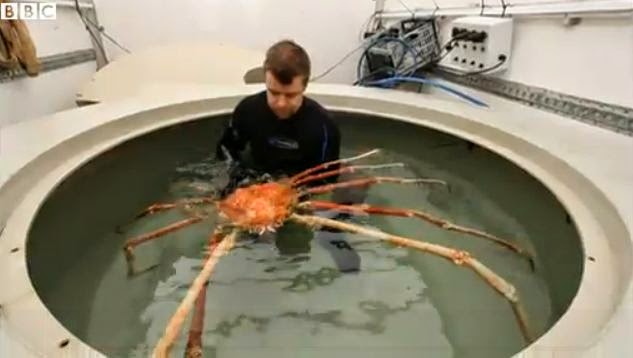 This is a Japanese King Crab. You'll note that it is huge. In fact, if we were to take that and make it a monster the person in the pool with it would likely be being crushed to death by it right now. But beyond just long legs lets look at it. It has hard shell everyone. It is a crab so it likely has pincers/claws. It can work under water or on land (though the legs may have a rough time supporting this guy on land.)

It is a very good beginning to something that could make for a very fun fight.

Add Some Mojo...
Now, assuming you are making a demon and not just some random encounter, you want to add some mojo to the creature. Something to give it that super natural kick. Maybe speed, strength, an immunity to certain attacks, or just flat out "hard to kill"-ness. That is up to you. For a major encounter I recommend making whatever you found - in this case a king crab - huge. Size gives something a natural sense of power.

For this guy in the picture, what would happen if we made him twenty feet tall when standing "normally." He's still deceptively small compared to the 20' height but we have a sense of wonder and power too. Those legs become VERY long and potentially dangerous at twenty feet. Oh, and since he's a demon we're turning those bumps and grooves on the crab shell into razor sharp barbs.

Now we have a 20' tall demon with razor sharp barbs all over its body that is completely covered in a thick chitinous shell. We could add more, depends on the stats we're already giving the thing I suppose.

Consider A Weakness
This may seem like cheating yourself, but the monster needs a way to be beat. This doesn't mean something like "instantly dies on a called shot to the underbelly" or "hits to the giant eyeball do triple damage." It is more like a way to do damage and let the thing die. Depending on your group's level/lethality this can be easier or harder.

In D&D terms for instance a creature whose Damage Reduction is removed by being struck with any magical weapon doesn't benefit much from its DR if the party is like level 8 or higher. On the other hand, a creature who gets massive DR unless the weapon is +5 or better, is probably going to be a pain in the ass to kill unless you have an epic level party.

In our crab guy's place perhaps we have a high damage reduction from the shell, but it is easy to hit. It could also be possible to break the armor in an area with Heavy Weapons. The creature, if it was a shadowlands tainted monster, would almost definitely be vulnerable to jade.

Here though, the weaknesses should be tailored to your group. For a big monster fight you want something that will void the PCs biggest/most direct solution but still leave it killable before wiping the party. How you do that is up to you.