Breachworld: Answers from the Creator

I've talked before about my small blog-based friendship with Jason Richards. With his kickstarter now up for his new game Breachworld I thought that I should help him get some press out there. With that in mind I sent him a few questions, and Jason agreed to answer them. So pull up a chair and see what the creator of Breachworld has to say. Oh, and those links above will go to Jason's facebook page, and the kickstarter. More blatant links come after the break. 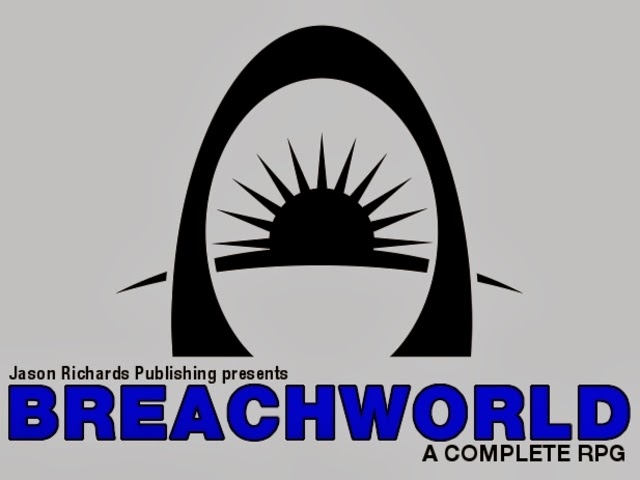 
1) Starting with the basics, where did the idea that became Breachworld start?
Really it started because I wanted to design a setting for Mini Six. Zachary Houghton (of rpgblog2.net, among other endeavors) introduced me to the system a number of years ago. It made me reminisce about West End Games and their D6 system, and I thought that it would be great in an open world, kitchen sink environment. I considered what elements I wanted to include in the game. Fantasy was out, for me, just because that's a crowded market and it's not even really my forte. I thought that my first RPG should probably play to my strengths and experience, so I landed on post-apocalyptic. Add in weird aliens, creatures, and the paranormal, and the rest just developed to fill in the gaps.

2) Going a bit deeper than the premise for the game, what is Breachworld really about?
I think it's about the perseverance of the human spirit. I hate to paint it like humans are the protagonists of the story, because that's not really true, but since Earth is a human world, they tend to be very central. I think that as a species we are incredibly adaptable and persistent. Even total disaster can't seem to wipe us out, because we shift and change and somehow are still left standing, despite not being objectively "special." These adaptations aren't always "good," in the traditional, heroic gaming sense, but somehow humanity survives.

3) Do you have a favorite player option in the game? If so, what is it, how does it work, and how do you imagine it being used?
One of the great things about Mini Six is that it is so flexible. No classes or templates that you have to follow. There are Player Races, and there will be some sample character builds, but really you can do whatever you want.

There are some "special" types of abilities, though. The one included in the core RPG, and my favorite right now, is the ability to be an Epic, which is a character that is able to perform supernatural Feats. Think of an Epic like a sort of combination mage and psychic, and Feats as spells or abilities. There is no real "magic" in Breachworld, but Epics manipulate a theoretical substance known as Aether, which is the building block of both matter and energy. So, this allows a character to conjure objects, turn energy back into free Aether, transmute substances, read the energies of others, etc., all through the use of the Paranormal skill. Very versatile and very fun to play.

Other special types of abilities will be added on in inexpensive, mini-supplements, and will include things like the ability to pilot robots, use power armor, have advanced cybernetics, be a martial arts master, and that sort of thing, all with their own Feats, Perks, Complications, etc. These special skills can all be purchased during character creation or unlocked as the character advances.

4) Are there any tools/groups in game to help GMs with running more focused campaigns? Like a military organization that could give missions, or particular causes for the PCs to get behind?
There are a couple of factions at play in the Civilized Land, which is the initial geographic setting for Breachworld. One of these is the Resistance, which is an underground military movement that seeks to repel the aliens that have invaded Earth. The other is the Cooperative, which is a loose affiliation of individual cells of thinkers, teachers, and scientists devoted to trying to prop up society. It's the Cooperative that has uncovered the secrets to how to permanently close a Breach. To this end, they support Breach Research and Closure (BRAC) teams who journey into the wilds to try and stem the dimensional tides. Once a BRAC team leaves a Cooperative cell on its mission, it becomes an independent structure on its own, which to me sounds perfect for a gaming group.

5) What, if anything, has creating Breachworld taught you about GMing or Playing in RPGs?
There's a rule written in the RPG that I call "Rule #1," and I reference it throughout the book. It consists of two words: Have fun. Creating Breachworld has taught me that in our games, we need to keep that rule close to heart. There aren't "right" and "wrong" ways to play. If you're having fun, and your players are having fun, then it's a successful game. As a GM, I know that I have a tendency to get caught up in gravitas and grit. Breachworld has taught me that sometimes I need to lighten up and focus instead on having a good time, whatever that looks like.

6) Why should people play Breachworld over other RPGs out there? What does it bring to the table that makes it stand out?
Gamers come in every possible shade, so no RPG is for everyone. I think, though, that if you like open, sandbox games, you should give Breachworld a look. There will be adventure folios published, and plot point campaigns spelled out down the road, but the game's real strength lies in the possibilities it presents. You really can play however you want to play, with full support of the setting and mechanics, and no judgments. There are no alignments. The setting is never going to restrict a type of character to a certain narrow window. There aren't preferred classes that force certain Player Races into certain roles. I feel like my job as the designer is to provide a palette, and then let GMs and players paint their own picture.

7) Is there anything else you'd like people to know about this game?
Just that we're striving for the utmost in quality. The goal is for this to be a premium RPG experience. The book is going to be beautiful and full color. You should see some of the art that I've already ordered, because it is going to blow your mind. The format of the book (at half-sized, or 5.5" x 8.5") is to optimize the layout for both the physical copy and your average tablet computer screen. For all of this, the Kickstarter really give fans a chance to enter on the ground floor of something great, and at a great price point. Ordering now will offer quite a bit of savings versus ordering once the project is available from DriveThruRPG/RPGNow or other retailers, plus get you all of the free previews and developmental information as we go through this journey together.

Back to Me...
First I want to thank Jason for taking the time to answer the questions. Second, I want to thank all of you for reading this far, and - if you do - for checking out Jason's stuff.

You can find out more about Breachworld by checking out it's Kickstarter page.

Finally, you can click here to read Jason's blog and see what else he has been up to.