If It Has Stats It Can Be Killed

Just a small quickie for this Monday morning. Over the years I've come across a large amount of GM disbelief when their players overcome some monster, or outright kill some giant creature, that they didn't think they could. On the other side, I've seen lots of times when Players thought they didn't have a chance when in fact things could have been really easy with the right approach.

What it boils down to though is that if an encounter has rules, if a creature has stats, than those rules can be exploited, avoided, or otherwise rendered to defeat the creature. I don't care how many HP a dragon has, if it has a set number than that number can be reduced to 0 and the creature defeated. It doesn't matter how high the Armor TN is for something, if it is a set number it can be hit.

This applies even further when something has exceptions to clauses or other special rules that can make them go down faster. Any rule put onto a creature or character creates restrictions along with abilities that can be used both ways. A demon can breathe a cone of fire 3/day? Well then, if you can bait out the cone it is gone for the fight. Stuff like this.

Rules make openings. Plans mean things are set a certain way and can thus be overcome. The second you set something down in paper (presumably with ink) it has attained a level of power and it won't go beyond that. From there players can find there way around, through, or over.

If it has stats, it can be killed. 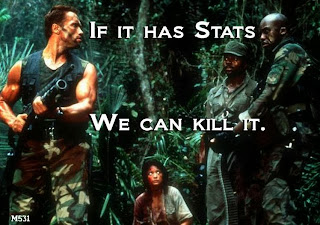