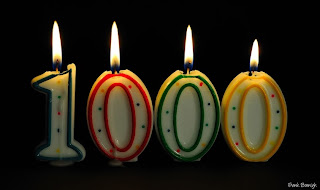 It kind of snuck up on me but today marks the 1000th post on Reality Refracted. That's kind of ridiculous all things considered, and more than I ever imagined I'd stick around for. Now, I know not every post has been stellar, and a fair number of that 1000 is things like "no post tomorrow" or "post late" but the vast majority of it is talking about gaming and advice on gming, playing, game design, and more. 1000 is a long road, and it has had its ups and downs along the way. I figured I'd share some of that today.

A Game of Numbers
Just how many posts is 1000 posts? Well, here is how it breaks down in a couple of ways. First off, assume only one post a day because that is how this blog - and most other blogs - work. So, at best one post is one day, or more to the point one day will only have one post.

That makes a lot of content. A lot of posts. Some of it has probably retread the same terrain, but even still. That is a whole lot of words. How many? Well, I'm going to under cut and assume that all the short posts I have counter the big posts and bring my average word count per post down to 500 words. At 500 words a post, including this post,  then this blog is home to 500,000 words. That's 6.25 NOVELS of content (average word count for a novel is about 80k) or about 1 and a half Song of Ice and Fire books (they average 300k a book.)

The Downs
Usually when talking about things I list the goods before the bads. Today though I'm going to reverse that. I want to end this post on a high note. So what are the downs? Honestly, there aren't many. I don't like missing days of content. I know I said a while ago I'd be toning down to 3-4 days of content a week and never did, but even still there are times when I miss writing the post until like 10 am the next day and it just kinda sucks. That is totally on me.

Honestly, I don't have any downs regarding writing the blog, but I do have some regrets about how I've handled the blog. For one, I regret that I haven't done more with M.A|C.C. For those that don't know, M.A|C.C is a game system I was designing near the beginning of the blog. It's been play tested, I've had people I don't know try the game, I've had some other RPG bloggers look it over and for the most part it's done very well with them. However, I haven't done anything with it in a long time. It is currently sitting in a state where I can't personally do much more with it. It needs editing, layout, art, and publication of some sort and I both lack the skills and money at present to do it. This is something I need to get on, but for now it has fallen by the way side.

M.A|C.C is probably my biggest regret so far, that I haven't done more with it already more than that I've squandered all hope on it. I enjoy game design. I enjoy writing. Yet I avoid doing both like the plague at times. Like I'm afraid of doing it and letting myself do it. That needs to stop going forward.

The Ups
As for the Ups there have been quite a few of them. Two of the biggest have been when other people have asked me to write something for them because of this blog.

The first person was Jason Richards, a free lance professional game designer who worked for Palladium. Jason saw my Character Types series I was doing, thought it looked similar to the Complete Characters project he had going on, and we collaborated on a pair of characters. The result were these two villains for a Super Heroes game. Sadly, they're unavailable right now as Jason ended up landing an awesome job in his other career that pulled him away. I've also not spoken to him in a while, but it was awesome working with him however briefly and definitely one of the highlights that gave me the confidence to keep the blog going when it was still very young. And since I can't link to my super hero character, here is one of Jason's original creations that I absolutely love.

The second awesome and big vote of confidence came from Tourq Stevens. Tourq runs the Stuffer Shack, an awesome store and blog where multiple bloggers can write articles. Tourq not only wanted me to write for the Shack, but he wanted to pay me to do it. Now it wasn't much per post, but just the fact that someone liked my work enough to reach out to me, ask for my work, and offer to pay me for it was awesome. I've written a few posts for Tourq since then, but sadly that has fallen off. My concentration has been here, but I'm glad he lets me still help with things like the Site of the Year award - he also pushes me every year to submit Reality Refracted for entry which is also awesome. Tourq is an awesome guy, and you should all go to the Shack and spend time there. They have a lot of content.

Another cool up was when I found myself getting snippets of news information from various gaming companies. I don't get a lot, but on occasion I do get notices. I try to spread the word if I think they look awesome. I probably don't do it enough, nor do I go out searching for it enough, but it's been cool to be included on those lists.

Finally though, the most awesome thing, has been watching my readership grow. At present there are 64 people subscribed to this blog through Google, and more that come here every day. I have people who read this blog regularly. Some of you have even posted articles on places like Reddit and other websites to discuss what I am saying. You guys are all awesome, and it is really cool to see that people are coming here and reading the words I'm writing. So thank you, all of you. I can honestly say this blog wouldn't still be here without you guys.

Finally, Advice
Finally, to wrap up this massive post, I have some advice. This is mostly on writing blogs and getting to 1000 posts with your own work. Sadly, the advice is very generic. What is it? Keep at it!

That is it, just keep at it. Set aside a time of the week when you write blog posts, write them early if you can, but write them. Keep posting them, try to hit your scheduled time as much as possible, and just keep at it. Eventually it becomes habit. Eventually it becomes routine, and that is when you have it made. When you sit donw and realize you have time so you bang out the next day's, or the next week's, post and get it done. It is a cool feeling when you log in to your blog site to "get the next post ready" only to see that somewhere along the way you already did it because it is just habit.

Consistency is the best advice I can give. It's advice I need to follow for my other endeavors. The human body and mind loves a pattern, so make your blog part of your pattern and the rest will take care of itself.

Thank You!
Thank you again to everyone who reads this. Hopefully we can have another 1000 posts of content and discussion.

Email ThisBlogThis!Share to TwitterShare to FacebookShare to Pinterest
Labels: milestones