Some Maps I Made

In lieu of the normal Discussion post, I thought today I would share some maps I've made. These have already been revealed to my PCs in the relevant game - or don't have spoilers. Feel free to use them for your own games. These maps were made with Dungeondraft and/or Wonderdraft.

For this release, there are two city maps, a subterranean Dwarven City called Kor Mahldur, and a Drow port city named Selamnaiqure. There is also a random city street battle map for a random urban encounter. 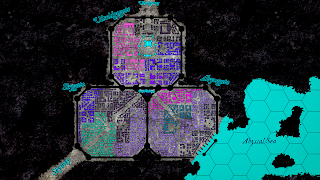 This is the Dwarven City of Kor Mahldur. It is the Capital of the Ultridge Kingdom. Not shown on the map is that the three separated districts are also on different levels from each other. The Skygate district is near the surface and leads out to the surface world. The Abyssgate district is in the Underdark and comes up against an Underdark Sea. Ultridgegate on the other hand is in the middle and leads to Dwarven Deep Roads and the rest of the subterranean Ultridge Kingdom. 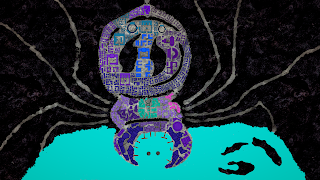 The drow port city of Selamnaiqure. The PCs haven't arrived here yet. Like the Kor Mahldur map above, this was made in Wonderdraft with the Underdark Theme from Cartography Assets. I'm glad I could get the general spider shape into it along with the hidden roads. 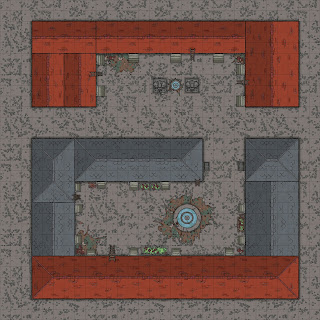 The aforementioned urban encounter map made when I realized Dungeondraft had added a roof tool for buildings. While simple, I like that the rooftops and ladders give a real shot for multi-level combat with archers on the roofs or players fighting up ladders. One thing I wish I had known about when I did it was the 'Shadow Path' tool, but I may take it back and update it to try with that. 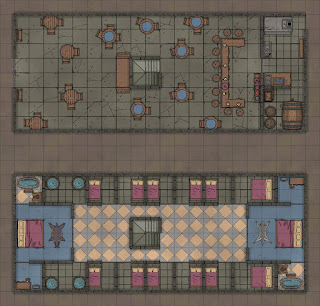 As a bonus, here is a map of an inn. Made quickly when I realized I might need to fight my PCs in their current place of rest. Still, it came out well enough all things considered. I'm also a fan of the purple bedding, even if it was mostly from me being too lazy to change the currently selected color after placing bottles on the bartop.