Last week we started to build a dungeon. Today we have the first of several maps for said dungeon. The idea for today was to take what we established last week and make the basic map. This is not populated with encounters or traps, it is just the lay of the land. I kept to three goals when doing this.

As I don't have a scanner I didn't do this by hand with graph paper and a pencil. Instead I used DungeonDraft. DungeonDraft is relatively cheap, produces good looking maps quickly, and is easy to use. Those are all reasons I like it. It does, however, have some quirks I'm less than fond of - and has a tendency to crash at times, so save often if you're using it.

That said, our goal for this map was to do the surface level of our dungeon. As a reminder, this is a dungeon that was built by a Chaotic Good monk to be a stronghold. We figured it was originally a temple converted into a fortification. To do that, I effectively plopped down a rectangular building to be a temple, and then built defenses around it.

As you'll see below, that comes in the form of a 10' thick outer perimeter wall, zig-zag corridors by the entrances to funnel invaders, and towers in the court yard that are topped with ballista for aerial defense of internal defense as needed.

What this map still needs to be useful in a game is simple: Encounters ('monsters' and traps). Still it is a good start. And, more importantly, I don't want to start placing encounters until we have the other 2 levels done so we can look at the potential flow.

For now we have this, and next time we'll hit either the basement living level or the underground entrance. 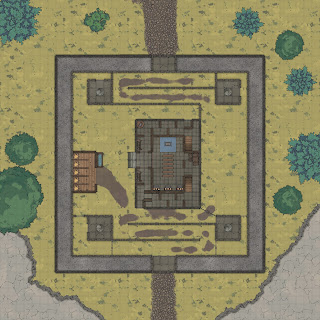 This is the basic design for the guard towers.