We Built A Table Topper - Part II (Now With Pictures)

Over the weekend my buddy and I took a shot at revising the table topper we made in November to get it into a better spot. It still needs work, but after what we did (mostly shortening the legs and changing the hinges) I'm a lot happier with it's appearance, how it feels at the table, and everything else about it. In the process I learned a valuable lesson about doing a little bit more research before jumping into projects, and how sometimes the 'cheap' way and the 'smart' way have literally the exact same cost.

((Comments are disabled due to high spam.)) 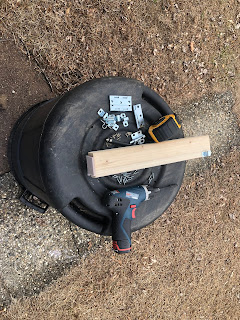 The first thing that had to be done was getting the hinges we used for the quick assembly off. Hinges, and locks. The idea was that the hinge would let the leg rotate and either be deployed, or folded into place for use. The locks would then hold the leg up against the table in its folded position, or deployed for the table to be used.

As you can see that is a lot of metal. Screws, locks, and hinges - all very cheap individually - added up to about $30 at our local Home Depot. But they had all sorts of problems, including the lock loop not being the right height for the bolt to slide into without help...a kind of pain in the ass problem. Especially when a better solution cost almost literally the same amount of money in the form of these hinges. 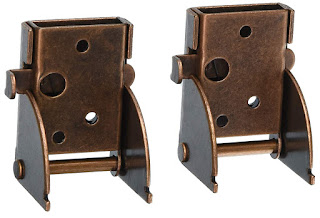 These are Rockler Posi-Lock Hinges, and you can get them in 2 packs from Amazon for about $14.99 each. I get free shipping from Amazon Prime so no cost for that. These hinges lock folded or deployed, which means 4 of these replaces 4 hinges and 8 locks. That's not only a lot less screws, it's just a much more elegant solution...for the same price. I found these thanks to a post made on reddit. You can find that post here. The main post also has another example of a similar table topper another person is using.

We ended up cutting off 4 inches from the legs from the initial build. The first time we built that was 15" of leg before the table. It sounded modest at first, but in actuality made the table not only really high but also kind of gangly. The blue line in the first picture was a rough guess to let a large slurpie cup fit under the table. The black line is a measured 4 inches - much easier to cut to, and much cleaner. Slurpie cups still fit under, but the straw needs to be adjusted. Still, it works! 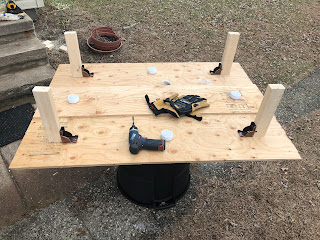 All the legs attached the underside looks like this. The connecting board running down the middle was necessary because when we bought the wood I didn't have enough space in the car to fit the full side. It's a bit of an annoyance, but you barely notice it in practice. I don't have the name/brand for the lights as my housemate bought them, but they take a triple A battery, are remote controlled, and can do white, green, blue, and red light which is kind of cool since it lets me adjust lighting beneath the table if appropriate for mood/effect in game. Each light seems to work for about 6-8 hours on a single battery which isn't bad. Replacing batteries can be a pain, but they're surprisingly simple to replace and rechargable batteries are a thing so I kind of like it. The lack of wires is really nice since they tend to get in the way. 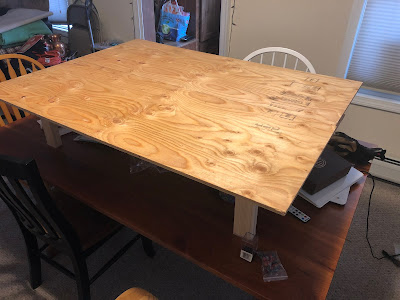 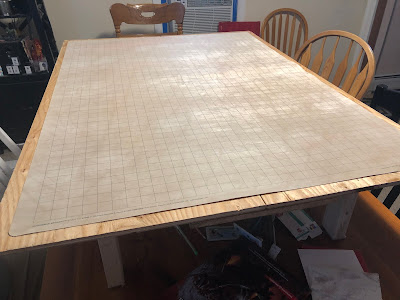 And this is the table topper in place over the table, and with a chessex megamat on top of it. Excuse the messy house, we're in the process of cleaning up. Still it gives you an ideaof what it looks like.

We've used this for a session in two different games. It's definitely been a contribution to the game going smoothly. I have more plans for thetable. I want to get a border for the edge to smooth it out, and I want to sand the whole thing for much the same reason. I'm debating giving it a felt top to protect the wood. Players have also talked about the possibility of having attachments for things like holding character sheets and such.

I'll likely post again with an update if I get it finished. For now though it's servicable, functional, and best of all stow-able.

New comments are not allowed.