World maps aren't necessary for all games, and you should never feel bad for not having a map. However, I made the decision I wanted to at least learn how to make maps a few years ago and have taken some steps to learn. I also find for some games - particularly campaign style RPGs in fantasy universes - that it can be a lot of fun. Today I want to talk about building a world map, share some advice, and, well, we have pictures so why not.

Continents and Land Masses
Having knowledge of geography can help with making a map, but - trust me - it's not needed. The first thing your map is going to need is continents and land masses. This can be done in a number of ways. I tend to just draw a general shape on the map letting Campaign Cartographer's fractal line drawing add variance to make it look natural. However, there are other ways to do it. I think my favorite two I've heard people use are the grease stains on the top of the pizza box when they get delivery, and dropping a pile of rice or noodles on the sheet and tracing the outline.

When you're done, it should look something like this. 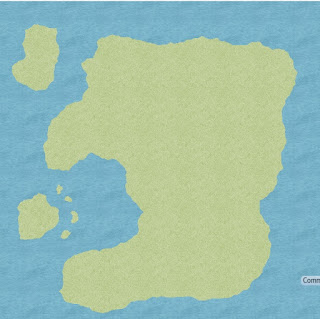 Mountains and Rivers
The next thing you want to do is draw mountains and rivers. Mountains form from two things: the first is where tectonic plates rub against each other and one - or parts of both - is pushed up through the top. The other is volcanic activity. At least, that is what my very limited understanding of how it works says so please correct me if I'm wrong.

What I do know is that every mapping guide I've read has said to start with the mountains and rivers first. Mountains do a lot to direct the weather - stopping certain currents from going past a certain point, or shaping them to go to some other place - and rivers are one of the main ways water gets to different lands.

Also, while drawing these out, keep in mind these two rules: 1) Rivers flow from the highlands (read mountains) to the lower points either towards the ocean or towards some other body of water (which likely feeds into the ocean anyhow on its own.) 2) Rivers do not split apart as they run, but they do come together. So as your rivers go from the mountains to the ocean they will join together but not break apart. 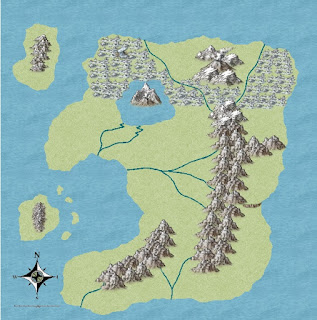 As a note, the inland sea with a mountain in it was made because it's a feature I wanted in the world. The ice wastes technically come in later, but that's beside the point.

Forests and Other land Features
With the mountains and rivers done you can add the forests and other land features. There are general rules for things like deserts, but you can learn specifics about them with a quick google search or wikipedia. Even if things shouldn't go together in the natural world, that doesn't mean your world can't have things in those places. Magic is, after all, a hell of a drug.

If this map is for a game, remember to place things where you can have events for your players to explore. If it is for a story, keep in mind where you want events in the story to take place.

With those bits added to my map, I had this: 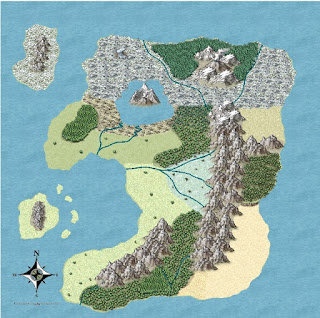 Cities and Other Features
You have all the terrain placed. The map is good to go as is really. However, it's generally good to put down some cities. Remember, this is a continent map, so you're not going to see every little village and hamlet. However, you will see major cities, major strongholds, and other big things like that.

You don't need a lot. Leave yourself room to grow into the map. But having some big landmarks is a good thing. Also keep in mind that cities tend to spring up on water - where people can travel and trade can come in - or in other places where there is a reason for it for some reason or other (for example a holy site, or some phenomena that brought people to it.) This isn't to say you can't just put a city where you want, just remember to have a reason for why the city is there.

My map looked like this with cities. Note there are two in the desert on either side, both near water. The other three cities are around the place where something has ripped a chunk out of the continent. I have story reasons for them as well, but just being on the water where they are (the north, the south, and the middle on the western side) also gives some natural reasoning for them to have grown there for trade and commerce while accessing those parts of the continent. 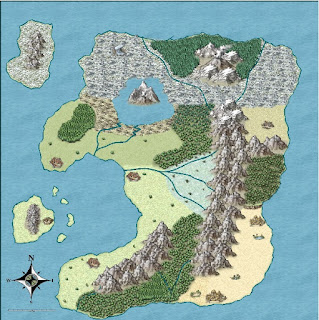 Names, Labels, and A Sense of Scale
Finally you need to name things. Not every feature on the map has to be named, but odds are the people of the world have named the forests, the mountain ranges, the cities, and any natural feature large enough to be on a map of this size.

On my map each grid square is 50 square miles - more on this later - so the continent is fairly large with lots of room to explore. I also named most of the features just so I can refer to them easier when making my world bible for what those things are.

At this point the map is finished, and mine looks like this: 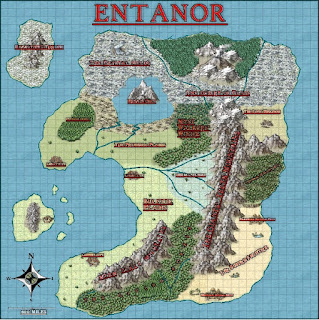 A Note On Scale
I want to mention again that this is a large scale map. Like I said, each grid is 50 square miles. The distance via water - a straight line path - from the northern city to the central one is about 400 miles. That's just more than 1.5x the distance from Boston to New York and means that land travel is even longer. You think that whole area is plain and barren? No, not on your life. However, details like that don't appear on a map like this because they're not big or important enough.

Smaller rivers, streams, and tributaries exist but are not depicted. Countless villages. Countless small forests and copses of trees. A forest could be 5 square miles - twice as big as Detroit at its peak - and not show up on this map because at this scale it is too small.

I tell you this to keep in mind when making the map. Don't fret if you start your players in the plains but need hills or a small mountain because those can exist in any grid square as long as they're not absolutely huge or massive. Embrace the scale, mark the big things, and develop the small things are you go there and need them.