I've had this idea in my head for a while. It's not particularly special or unique, but I figured it'd be worth sharing - and the map was worth spending some practice time on it. This would work for any western fantasy game. I suppose you could use other settings, but it was meant for that kind of game. In specific it was meant for Dungeons and Dragons 5th Edition, though I imagine it'd work fine with Pathfinder, FATE, or about anything else.

For the purpose of this I'm going to assume D&D because that's what I made it for.

Setup: The PCs should make level 1 characters by the rules in the book. They should take their gear. I'd recommend using the pre-fabbed equipment loadouts, but if you want to let them purchase custom gear with gold go for it.

The Beginning: The game starts with the PCs washed ashore on the western side of the mountain. They don't have their equipment on them (though they should probably be dressed.) There are foot prints around them on the beach, which a tracking roll can determine belongs to goblins. There are also, likely, some dead bodies - other ship people.

In short, the idea is a SERE scenario for the characters. SERE stands for Survival Evasion Resistance Escape. Throughout the adventure the primary antagonists should be the goblins, preferably in managable numbers. There can be some hob goblins and what not as well. The idea is the island should take the PCs from level 1 to leve 3 or to level 5 depending on your whim.

I'll leave the further details to you. Enjoy. 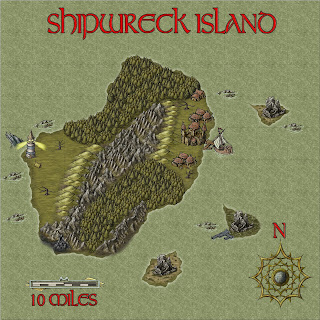