I talked last week about Campaign Cartographer and my on going quest to get good at mapping. This past week I've had a side project: the world of Selanria. It started as an attempt to practice Campaign Cartographer more. Get better at layering contours, shaping continents, and all that. Since then, I've decided to go a bit more indepth.

Mapping, you see, gives a new way - to me - to do world building. Normally I start with the concept and the narrative and go from there. The area has a forest because we're going to have a forest involved at some point. The mountains are to the north because that's where the story puts them. With mapping though, the world is drawn as a blank slate first.

Forests, mountains, plains, and rivers are no longer arbitrary things. They exist, or don't exist, depending on the map. In effect, it's working in reverse for me. I don't start with a nation of islanders that make their trade on the sea and run river boats through the main land. I start with a series of islands, and from their develop the islanders around the options that are there.

It's what I'm hoping to do with Selanria. Perhaps I'll talk about it more as the weeks go on. For now though, I figure I'd share the map. I'm not 100% happy with how little ocean there is between the continents, nor am I completely happy with the shape of the continents, but for what it is I like the basic look of the parts. 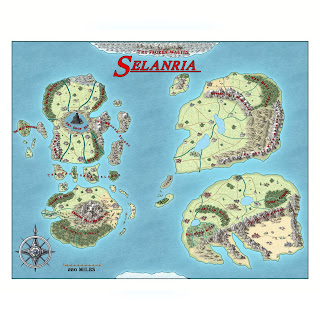 If you zoom in close you'll notice the cities are color coordinated per continent. That was one of the last things I did, getting some semblance of which major holdings went together. Also, that is a key point, only major holdings are shown here. Yes, there are some smaller communities too, but the idea is that this isn't the kind of map that shows all the details and every little villain. After all, this is a 2000x1600 map (miles wise for what it shows) so you're not going to get that. 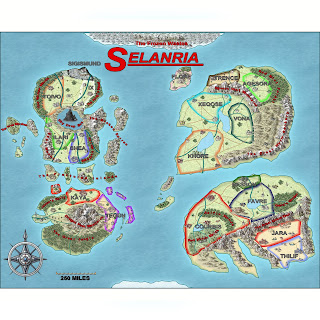 And that's Selanria for now. A more or less full world (or part of a world) with multiple countires and everything needed for a fantasy world (low, sword & sorcery, dark, or high) to thrive.