Visual aids can be a powerful thing in games. There's a reason most setting books have pictures and maps of the location, because they give you something to point at and go "it looks like this" and that spares you a whole ton of description. This is even better if description isn't a core skill of yours, if some aspect of the specific appearance is vitally important, or if you just don't want to take the time to describe in intricate detail every foe or monster. With cities and buildings it can be much the same way, and maps are a great way to not only show the city but also to show where a player is versus where they have to be.

Now, I figure that mapping is a skill and like every skill it is going to take practice and so for that I've set myself some ground rules.

Of those the most important one is the first rule. The reasoning behind it is because while I am getting started I want to be committed to what I am doing. Mistakes will happen - and that is fine because mistakes are how you learn - and I don't want to erase those. If I can erase lines then I will simply keep erasing and erasing over the first lines because they're not good. By doing it in pen I have to move forward, and perhaps in working forward what once was a mistake will become something beautiful.

The other two rules are just to keep organized. By keeping one project per page it means that I can just bring one page with me to somewhere (i.e. the kitchen, my computer desk, etc) and work on it. The 4th rule is so I don't get over focused on being perfect. First I want to learn the basic structure, I can worry about keeping everything the proper size later on.

Along with these rules I have also decided that I will be showcasing some of my work here on the blog. I do this one, because others may want to get started and sharing my work will give something to compare to, work with, and maybe even learn from; and two, because if I make it a part of the blogging pattern it gives me more impetus to keep it up and to have blog posts ready to go early.

That said, I've started with a few things. The first map is this: 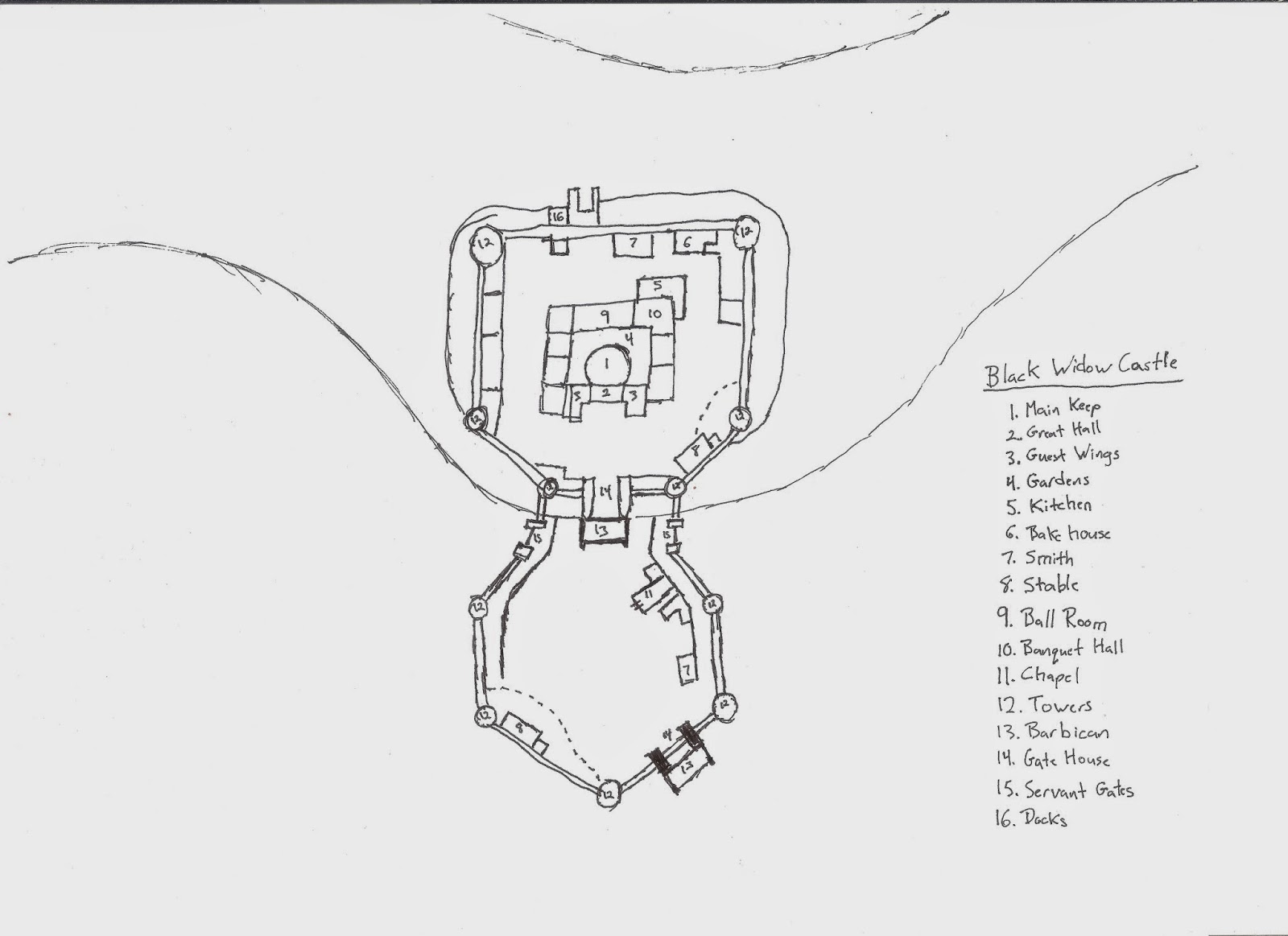 I've been calling this Black Widow Castle because of the hourglass shape the walls had. This was done while looking at a website about the structures medieval castles had (which was fun to learn about) and I think I partially copied some of the layout from there. Still, it is a functional castle with a moat that cuts into a river putting the main keep on an island.

The second map is this: 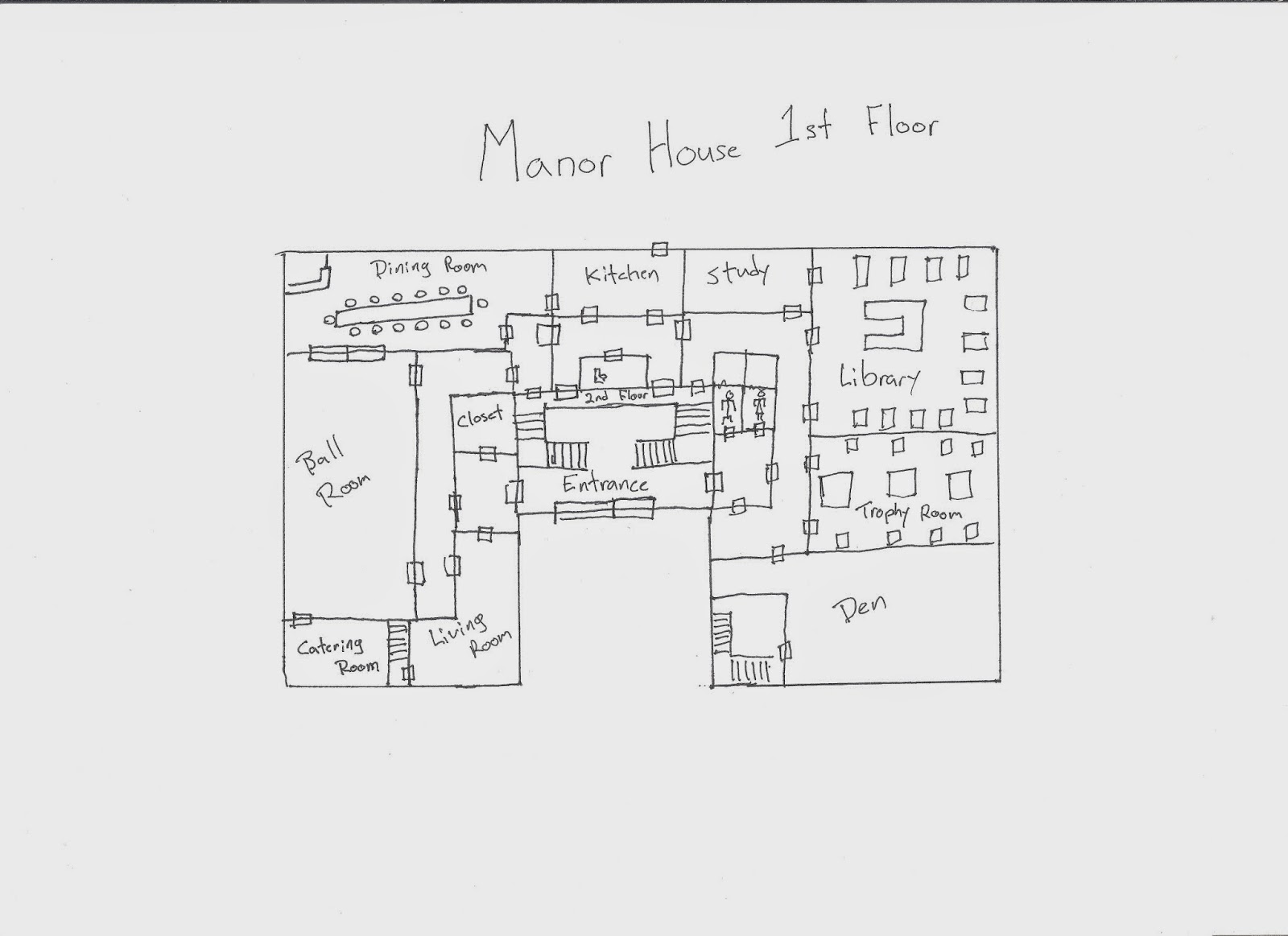 I'm not sure why but I figured I'd switch to a more modern setting and do the first floor of a manor house, partially inspired by the likes of Wayne Manor. This one has a couple mistakes (the hallway above the main entrance should be wider) and also has a bit of a haphazard layout because I was making it up as I went along.

Today I got ambitious (was home sick from work and screens were making it worse) and decided to make an attempt at the inner city of the Kumo's city from my l5R game. 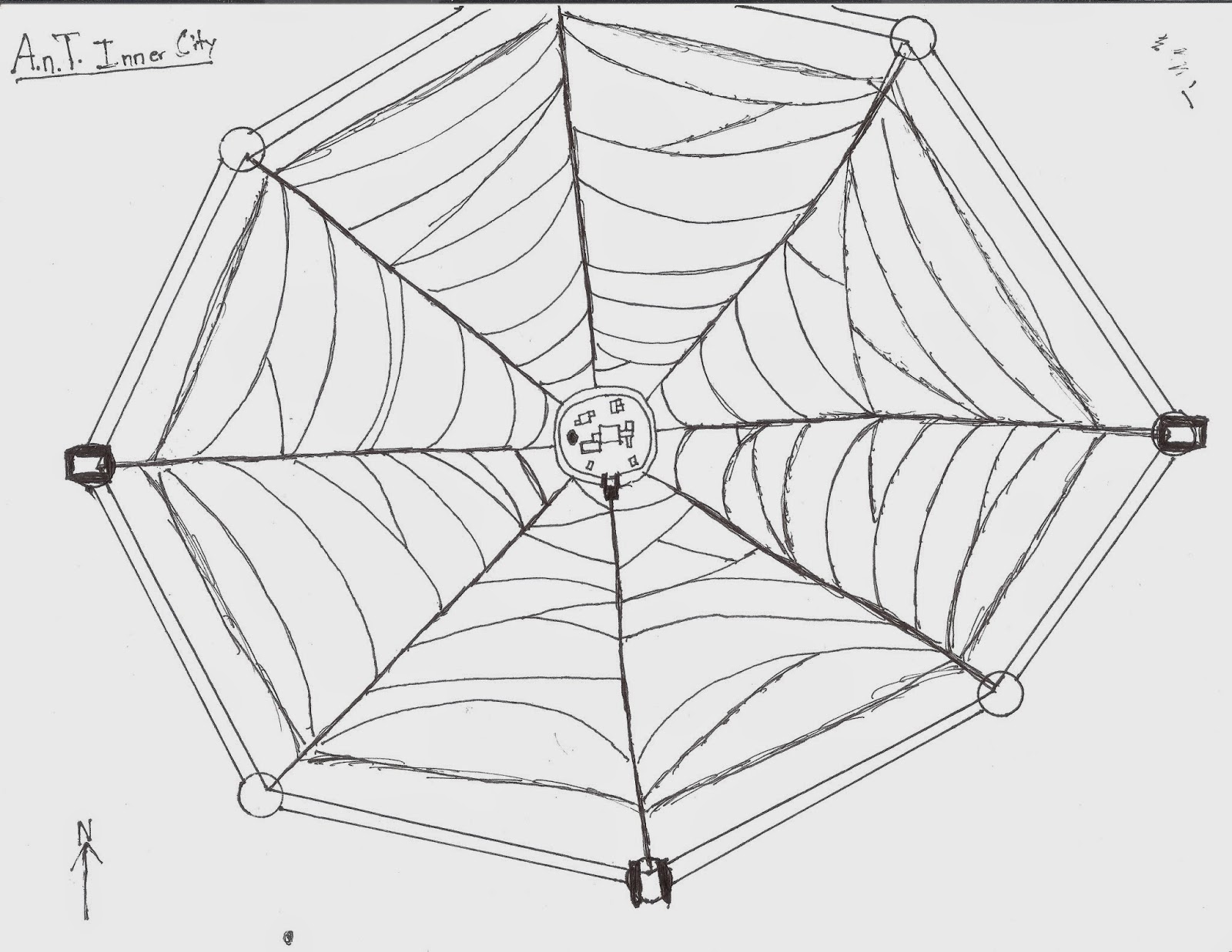 The city is, obviously I think, based off of a web. The main roads go off from the walls of the castle with the connecting strands making headway into the rest of the city. Faced with the concept of drawing houses in here I got even more ambitious, and currently have this as a work in progress: 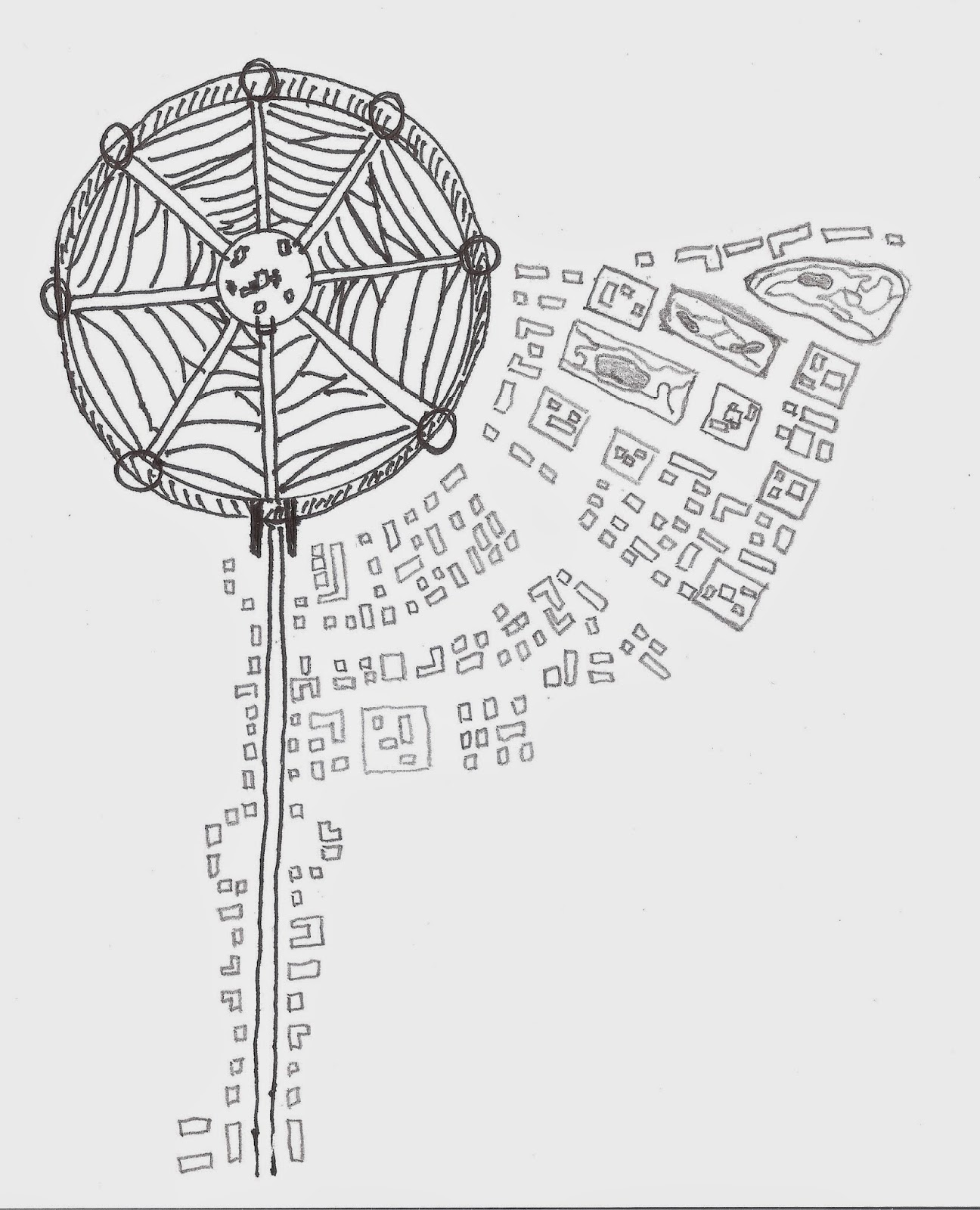 Scaling down the size of the inner city but keeping the lines for the road was kind of a pain. Broadening the main roads adds a nice touch of organization though I think, and I think I like the more circular pattern here (I used a stencil to do it quickly.) I caved on my pen rule though after drawing the Emperor's Road (it goes straight down) and started adding in buildings with pencil.

To be blunt, adding the buildings is tedious, but I like how the city is shaping up. It is going to be a lot of work filling the rest of the page (and surrounding the inner city) but I at least have a mental and written guide. The fun part is going to be setting district lines and other side roads. Most of what is visible here is Goushou and on the "upper right" of the pencil section Zembi. These are the market area and the place where the Great Clan ambassadors have set up home. The bigger squares with little squares/buildings inside them are estates. The other big boxes are gardens. A few roads are naturally coming into play, and I'm curious about what happens when the desire for "neat orderly rows" of buildings comes into conflicts with the idea of building around a circular city (natural zoning?)

Anyhow, I imagine that map is going to take up a lot of time in the coming weeks. Hopefully it won't look bad in the end. In the meantime, anyone have any fun tips for this?

Oh, and as an aside, my goal is to - after I work on scale - begin to incorporate other things such as hills, water ways, and other natural phenomenon like that. I imagine by that point though that I'll be doing this a bit more digitally, even if it starts from paper and hand.

Email ThisBlogThis!Share to TwitterShare to FacebookShare to Pinterest
Labels: learning a skill, mapping