Preparing My Next Arc

I figure for today I'll pull it back a bit and talk about what is going on with my own games. As you may, or may not, know already my L5R game is on a bit of a pause while one of the players runs an arc of his own game. This is by design with the two games trading off, though with weather and sickness I must say that this pause has been longer than normal and has me a bit antsy. In response to this, I've decided to try and go all out in preparing for my next arc. Today I want to talk about that, what it means, and where I think the potential hazards to this approach will fall.

Going HAM With Prep
First, for those who don't know, HAM is relatively new internet slang that basically means "Hard As A M#*(@(#(*$." It's used for when someone goes all out in some endeavor and it is what I am hoping to do. For the first time in years I've actually started working on some, small, visual aids to help with things once we're in game. So far that is just a cheap map of the fort my players will be in at the beginning of the first session, but I'm hoping to have more as we go one. 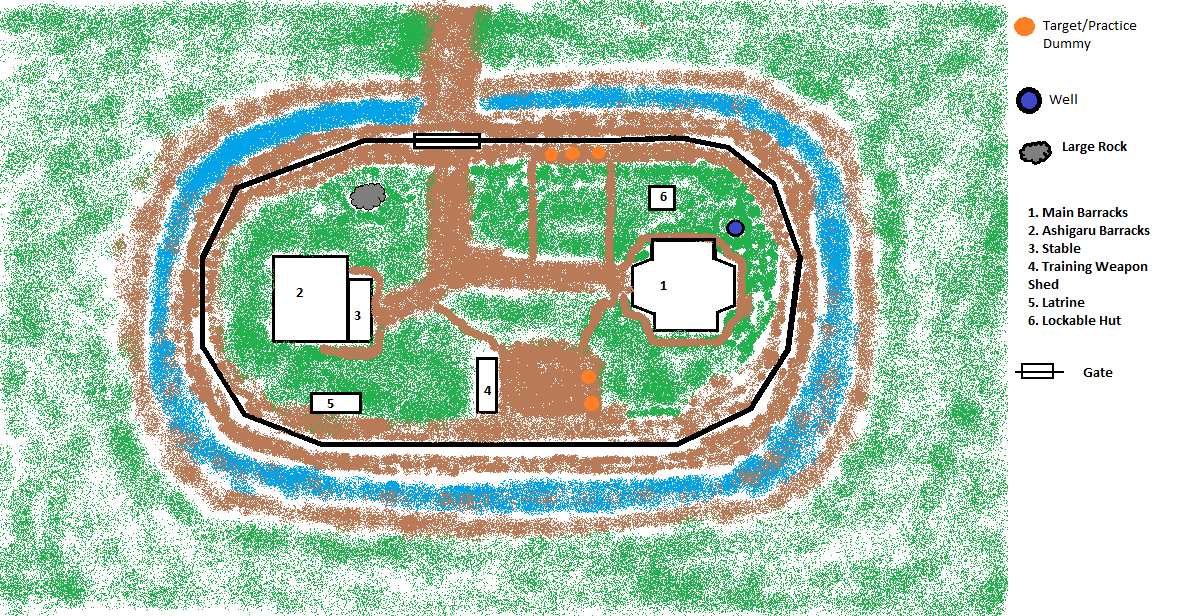 Sadly, that is about the limit of my artistic/mapping talents, but it should get the idea across. It may also make you feel better about your own ability to map, so yay for that.

Beyond Visual Aids
Beyond the map, that fort where the players are is going to be host to about 16-20 NPCs of import. This is an L5R game so by "import" I mean Samurai. Already all of those NPCs have names, clans, families, and genders assigned to them. Most of them have a class (bushi, shugenja, courtier, ninja) and for most of them you'd probably be able to guess just what it is. I'm hoping to have, at least, a simple stat block for all the NPCs and full pages for the higher ranking members. I'm also hoping to have at least one potential plot hook for each of the NPCs just in case a PC decides to latch onto one of them and they need to become a bit bigger of a character.

Branching Story Arcs
The last thing I'm trying to do here is take a page from one of my housemates and enable a story with truly divergent and branching paths. I want to know where things can go with these NPCs and with the PC actions. Some of these may be binary gates - i.e. "if enemy general is slain here then x, otherwise y" - but some may be more complicated.

Compared to my Normal Approach
The key difference here will be the amount of prep work done. Where before I would get a feel, know my NPCs as best I could, and then improv along with my players here I am hoping to have a lot of things thought out before hand. Instead of having to guess "how will this NPC react to what the PC just did" I'm going to try and guess how my PCs will react to the NPCs and have some pre-arranged responses and ways they can take things ready to go.

For example of this, normally I would just improv where an NPC went and then, sometimes, the NPC gets lost in the shuffle when they aren't a feature anymore. Sure, they can come back, but for a while they're just kind of in the black...doing stuff. With this, for example, if the PCs don't kill the base commander I have ideas as to how he'll play out and make potential future story lines I want to do either harder or easier depending on his relationship with the PCs when they part ways - if they part ways. If he dies I also have ideas for how things can play out depending on how he dies, how he feels about things, and how all of that is taken by his family/allies.

Lots Of Work, Lots Of Danger
The reason I don't normally go HAM like this in prep is only partially because it is a lot of work. It is going to be a lot of work to setup and a lot of work to maintain and keep going, but the rewards might be worth it and it can be fun to bury yourself in game prep for a bit. That said, there is a lot of danger here as well. For example, with all the prep I'm doing it might become easy to try and force the players towards what I have prepped instead of letting them go off and explore. That's not necessarily a bad thing, but it does run counter to the intentions I have with this game. It is also possible that the PCs will do things in such a way that a lot of my prep work goes unused. Unlikely, but technically feasible.

My biggest worry though is in over-doing it. I don't want an NPC to take over the game, and I can stop that, but I'm also worried I might be over doing the antagonist/enemy forces as well. It will be easier for me to come up with plans to stop potential PC actions on part of the NPCs because I'm approaching this slowly and methodically while the PCs will be in the moment. It isn't about building in ways that will work but rather not shutting down the ways the PCs expect things to work while still maintaining and presenting a challenge with credible threat and potential pitfalls should those challenges be failed.

For now though, I have a lot of plotting and monster building to do.